Excerpts from my correspondence with an ignorant Pan-Arabist Tunisian reader about Ancient Egypt, Punt (Somalia), and ‘Arabia’, a nonexistent land in the 3rd and 2nd millennia BCE

Many thanks dear Friend for your long email,

I’m from Sfax, and by chance I worked about Ramsenites a kind of stories widely spread in north africa. You are specialized also in old languages and I have a question about the representation in old egypt about Amoon sun-rise coming from the east Arabia? with smell of perfume and myrrh, is it true that rulers of old egypt were from yemen? So by the way what is the new traduction of this word in hieroglyphic (Cf. enclosed) 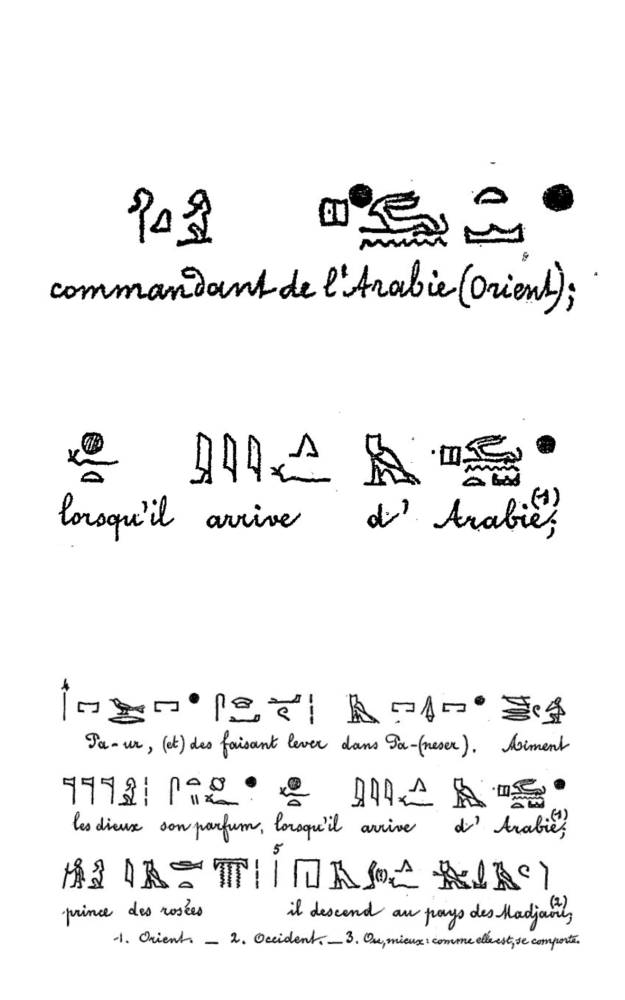 The picture that you sent me shows how vicious the colonial, Egyptological – Orientalist academics of France can be; they write a fake translation to confuse the readers and the students, and in the footnotes they try to say indirectly the truth, but end up in other lies! It is hypocritical, inane, inhuman and Satanic.

There is no ‘Arabia’ in any hieroglyphic text of the 3rd, 2nd, and 1st millennium BCE; and there is no Arabia in the text that you provide me with. The footnote includes another wrong word, e.g. Orient, but the vicious and criminal French pseudo-scholar writes ‘Arabia’ and ‘Orient’ in order to avoid the bitter truth. The word written in Hieroglyphics is not Arabia and is not Orient. It is Punt, and Punt is today’s Somalia. Exemplary dishonesty and premeditated confusion! I keep the document to include it in a denunciation of the Western pseudo-scholarship! Great example of viciousness!

If you want to familiarize with Classical Egyptian, please download the Pdf and use it extensively; there may be few minor amendments but the concise and systematic work is unmatched.

If you want to personally crosscheck the word, go the second section of the dictionary (English / Classical Egyptian) and turn on page 658 (of the Pdf document)!

The first mention of Arabs goes back to the Annals of the Assyrian Emperors of the 9th c. BCE, Same for the Sabaean (Sheba) Yemenites, who are not Arabs, but clearly distinct from them. As a matter of fact, the northern part of the peninsula belonged to the Assyrians and the Babylonians; as ‘Yathribu’ was on the mountains, the last Babylonian kings (6th c. BCE) had their summer palace there.

You also mention other topics; frankincense and myrrh were imported from the Red Sea coast and Somalia (Punt). There was strong Egyptian presence in 2nd BCE Somalia and the Hatshepsut’s Expedition to Punt highlights the importance of that land, which was also called Ta Netsheru (Ta Netjer), i.e. ‘the land of God’.

Some translate Netsheru as Gods, and the grammatical form is truly plural; but it does not mean ‘gods’ (except for the Egyptian polytheists like Queen Hatshepsut herself whose Satanic Theban high priests were the first in the world to conceive the evil theory of Theogamy); Netsheru means ‘the divine powers’.

Last, the Egyptians as Hamites did not originate from Yemen. Of course, there is a time honored Ancient Egyptian tradition as per which the Egyptians originated from Northern Sudan and more specifically Karima, which was Napata, the capital of the Cushitic state. But I reject this; it is merely Theban, anti-Heliopolitan propaganda of the 2nd and 1st millennia BCE. You can’t find the idea earlier.

Many thanks for your mail,

The most important thing in your email is that in your point of view in old Egypt there was no geographic word for Arabia an eastern land at less than 200 km. Perhaps it can confort the hypothesis that actual Egypt and Arabia were the same land !

If you want, we can continue our conversation in French or Arabic (I am ashamed that my Berber is rudimentary) because I realize that to some extent you misread. I did not write that “in my point in Ancient Egypt (I never use the false term ‘Old Egypt’) there was no geographic word for Arabia”. I stated a fact. You cannot find any word in Hieroglyphic, Hieratic and early Demotic Egyptian about Arabia or Arabs. In late Demotic texts, you may find a few.

It seems that your ignorance of History matches your cluelessness in Geography! You make nonsensical considerations about distant lands. Basics in Historical Geography – which you also never studied – are enough for anyone to understand that people move to faraway places (like Somalia for 2nd millennium BCE Egypt), if there is an interest, whereas they don’t move to nearby places (like the arid, empty and useless mountains of Hejaz) when there is absolutely no interest.

As we know that the territory around Yathribu belonged successively to 1st millennium BCE Assyrians, Babylonians and Iranians, we realize that the Egyptians would have to make wars against greater powers in order to reach that land which for them was useless, whereas of the Asiatic empires it was merely an extra territory at their circumference. This covers the period 8th – 4th c. BCE.

As I told you, the first mention of tribes called ‘Aribi’ and known to be moving in Northern Hejaz dates back to the times of the Assyrian Emperor Shalmaneser III. At that time, there was no land called Arabia, and no text dating to those days or before mentions that name. It became later known as geographical term describing part of Hejaz, when those barbarians settled. Even Alexander the Great, who went as far as Siwah in the West, as far as Niwt / Thebes (Luxor) in the South, and as far as Central Asia and India in the East, did not give a damn to invade the useless, arid and cursed land of those barbarians.

Then the Ptolemies did not find any reason to act otherwise. In the Ptolemaic period, the geographical term by extension covered the entire peninsula but the northern part of the Hejaz belonged to the Aramaean Nabataean Kingdom of Rekem / Petra (down to the area which is today called Madain Saleh and whch was the great Aramaean Nabataean necropolis – nothing the contemporaneous Arab barbarians could ever build even in their wildest dream!), whereas from the whereabouts of Najran further to the South, Southeast, East, and Northeast were located the different Yemenite states, i.e. Qataban, Sheba (Sabaeans – not ‘Sabians’), Himyar, Awsan, Hadhramaut and Oman.

In the second half of the 1st c. CE, the famous text ‘Periplus of the Erythraean / Red Sea’ (at those days, ‘Red sea’ meant a) what we call now ‘Red Sea’, b) the Persian Gulf, and c) the entire Indian Ocean) describes extensively the chaotic and barbaric situation of central Hejaz (proper Arabia), offering warning to navigators and merchants to sail far from that cursed coast. You will find it translated and commented here:
Prof. Muhammad Shamsaddin Megalommatis, Colonial Biases in Support of Barbaric Arabia, and Against Civilized Yemen
https://www.academia.edu/23145558/Prof._Muhammad_Shamsaddin_Megalommatis_Colonial_Biases_in_Support_of_Barbaric_Arabia_and_Against_Civilized_Yemen

The above explains what was difficult for a non-specialist like you to grasp.

My Kenya-based Greek friend had long discussions with me about these topics, and came up with an interesting question; as soon as I answered and explained the point, he composed an excellent article about this issue. Here it is:
If Yemenis are Not Arab, why did the Romans call Yemen ‘Arabia Felix’?
https://greeksoftheorient.wordpress.com/2017/04/22/if-yemenis-are-not-arab-why-did-the-romans-call-yemen-arabia-felix/

As regards your last sentence, namely that Civilized Egypt, which has always been located in Africa, and Barbaric Arabia, which has always been Asia’s most worthless and useless spot, ‘were the same land’, I can guarantee to you that this is the world’s most ludicrous, most mendacious, and more Satanic sentence ever uttered, and I urge you to liberate yourself from this paranoia as soon as you can. Otherwise, from neuro-scientist you will turn to neuro-patient. It’s a pity!

This sort of distortions have been subtly diffused by Zionists among the idiotic, ignorant and uneducated masses of the colonial constructions in order to faster bring their dismemberment, destruction and ultimate elimination. As all these useless and fake countries were cut off the Ottoman Empire and created to prepare the elimination of their populations, their end comes now close. You surely need to go through the following:
https://www.academia.edu/26064731/Why_Former_Ottoman_Provinces_cannot_become_Proper_States_-_By_Prof._Muhammad_Shamsaddin_Megalommatis

Selection of scholarly articles, entries to encyclopedias, and articles translated to Arabic

The Art and Craft of Blogging

The latest news on WordPress.com and the WordPress community.